HomeBanagher NewsBANAGHER, CO OFFALY: WHAT DOES THE PLACENAME MEAN?
loading...

BANAGHER, CO OFFALY: WHAT DOES THE PLACENAME MEAN? 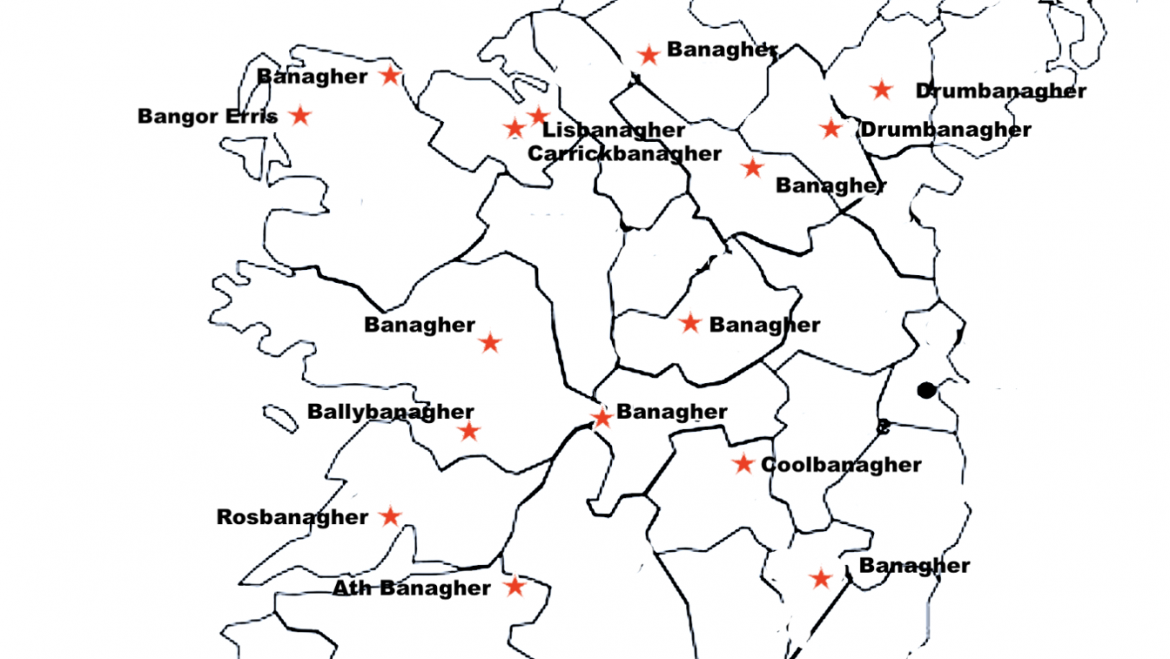 There are more than twenty places in Ireland called Banagher or a version thereof. Banagher is the anglicised version of the Irish ‘Beannchor’ or ‘Beannchar’. Most Irish placenames relate to topographical features and this is the case with ‘Beannchor’. In this sense ‘Beann’ refers to or means a ‘peak’ or ‘top’ and is widely used in the names of  hills and mountains such as Binn Eadair (the Hill of Howth), Na Beanna Beola (The Twelve Bens in Connemara) and Ben Nevis in Scotland. ‘Cor’ also appears in numerous placenames and refers to or means a rounded or curved hill, such as Cor Hill, Cormore, Corbeg, Corbane and others.

Survey maps showing places called Banagher/Beannchor or a version thereof show that while their altitudes may vary, in all instances the place overlooks the surrounding landscape. It may be that because of their elevated and easily defended situation that almost all of them are the location for ringforts or castles as depicted on the maps.

By far the best documented Banagher in history is Bangor, County Down. St Comgall founded an Abbey here in 558AD and it grew to become one of the most important seats of learning in Ireland, with almost 3,000 monks at the time of Comgall’s death in 601AD.

An extract from The Most Ancient lives of Saint Patrick by the Rev James O’Leary  refers to the topography of Bangor as follows:

‘Often times did Saint Patrick travel through Ultonia, very earnestly teaching unto its inhabitants the Catholic faith. And not seldom he turned, for the sake of rest for himself and his holy company, unto a certain hill situated in a valley where afterwards was builded the Monastery of Beannchor’

The very first historical record of Banagher(County Offaly) is as ‘Maigh Bheannchair’ in 1464 (The Annals of Ireland 1443 to 1468). Both Banagher and Maigh Bheannchair (Maghervenagher) are mentioned in a list of local townlands in the Fiants of Elizabeth in 1569.

Both ‘Beannchor’ and  ‘Beannnchar’ are used in historic documents. Bangor (anglicised from Beannchor) County Down was the location of a very famous monastic settlement founded by St Comgall in 558. There are numerous references to this ‘Beannchor’ in the Annals and in historic documents. ‘Beannchor’ is used throughout in The Annals of Clonmacnoise while ‘Beannchar’ is always used in The Annals of the Four Masters as edited by John O’Donovan. The subject is dealt with in detail in the book (referred to by O’Donovan) Ecclesiastical Antiquities of Down ,Connor and Dromore by The Rev William Reeves 1838 which can be found (and downloaded) HERE .

In that book various interpretations are made and confusing, and indeed amusing, conclusions arrived at. These are based on myths and stories associated with the Monastic Bangor and over time these have been linked with other Banaghers and in particular Banagher County Offaly. For example:

‘In all these cases the root of the word is the same being beanna the Irish for horns. And figuratively the word is applied to the sharp pointed rocks in the Shannon and to the crests of helmets’ !!!!

Matthew De Renzy who lived in Clonony Castle for about 10 years from 1610 and who was a learned Irish scholar mentions Banagher several times in his writings which he usually wrote as ‘the benghar’ which is noteworthy.

In the extracts reproduced below he calls the place ‘the benghar’ on six different occasions.

THAT BEATS BANAGHER AND BANAGHER BATES THE DEVIL !!

This article was written by: